Join the ride through The Circus of Life on this marvelous magical adventure!

The LookBook for The MicroCosmic Cartoon Show provides a glance of the potentional artistic styles of the movie. Much of the “look” will be determined by the director, the animation house(s), as well as our budget. This is, by no means, a final or complete view of all the possibilities. This is merely a taste of what is to come.

Take a scroll through the website to view the synopsis animatic teaser, listen to the demo-CD, plug into the live action Scene 1, and read about the way in which The MicroCosmic Cartoon Show emerges into manifestation. Imagine the possibilities! 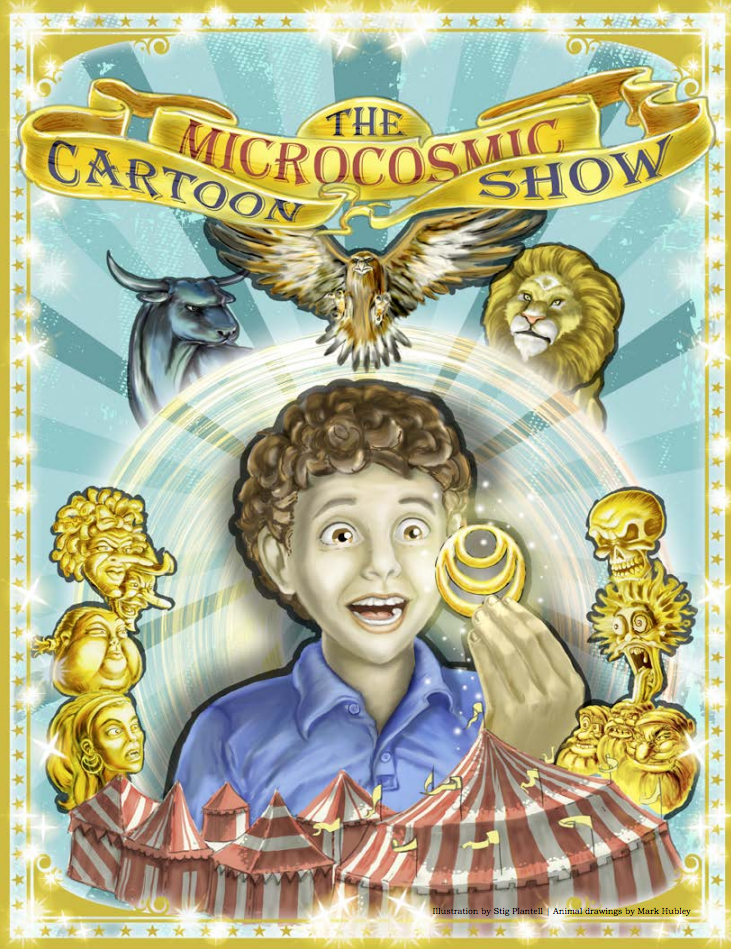 On a perilous quest to discover The Circle of Gold and defeat the Shadow, Chaos, a curious young boy embarks on an unforgettable journey through The Circus of Life, revealing ancient secrets, while confronting devastating deceptions that seek to destroy a mission that will alter the destructive course of Humanity.

It’s a magical, thrilling animated/live action musical adventure for the whole family that will inspire the imaginations of people, young and old alike.

The MicroCosmic Cartoon Show is an animated/live action symph-rock-tronic feature film for the whole family. It is magical, fun, and deeply penetrating in its scope.

We have the interest of a well known band for the overall score and we have potential to draw the attention of recognized musicians into this exciting collaboration, as each character establishes his presence with a unique sound.

A concurrent live action narrative is woven through the animated story. Both contrast Josh’s real world experience with his inner imaginative journey.

A curious young boy, Josh, magically born in a tree, asks his burning questions, “Who am I?”, “Why am I here?”, “And where is here, anyway?”.

He runs toward the shining city in the distance, only to discover that it is the Circus of Life. There he meets his guides, who befriend and challenge him. He accepts his mission to find the Circle of Gold. On his quest, he gets lost in the glittering attractions, sensual seductions, and terrifying deceptions of the Midway and Sideshow, always missing the signs for the Main Attraction, starring Cosmos the Magician. Horrified by the distorted reflections of the Mirror Maze, he tries to run away, but there is no where to run, there is only the Circus. In despair, he calls for help.

With the aid of his remarkable guides, he continues on his quest. He must face his own shadow and remain true as he realizes that he is the creator of his own story. Venturing into his Self-awareness, Josh sees that the Circle of Gold lies within and that he is indeed, the star of the show. In the spotlight, he must now perform the ultimate magic act, an act of transformation for Peace and Love on the planet.

Bullied at school, insecure, and at odds with his parents, Josh finds his artistic
passion and talents are just what is needed to help an old curmudgeonly man
restore a vintage theater. Together, with his two friends, they open The Planet Earth Theater to a resounding success.

Scene 1 was filmed to qualify for Section 181 of the U.S. Jobs Act. It provides a very substantial tax incentive to investors. We needed to shoot a live action scene and, since the animation was, at the time, bookended by two live action scenes, we chose this one and added in the animated Title Sequence. It is a working copy.

The MicroCosmic Cartoon Show Production, LLC was formed in November of 2011 as a separate entity to enable funding for this particular venture.

It has an extensive Business Plan, which you may request, if you are an accredited investor or a potential producing partner.

This is a Symph-rock-tronic Operetta.

Each character establishes his presence with a unique sound, blending different musical genres. They range from Blues/Jazz and Broadway, mixing Electronica with Hip Hop/Funk, and culminating with a Symphonic sound.

We have recorded eight of the seventeen songs in a simplified music demo.

The screenplay and music have won ten more awards at the following International Film Festivals:

Awarded the DOVE Seal of Approval

The MicroCosmic Cartoon Show was born on Christmas Eve, 1970. Hugh Rose and Prema Rose received the initiation of an ongoing transmission. It began as a children’s story, written in the style of a cartoon scroll book with music.

The story follows the hero’s journey through The Circus of Life. The young boy, Josh, asks his three burning questions, “Who am I?”, “Why am I here?”, and “Where is here, anyway?”

They elicited the help of Hugh’s brother, who was an artist and a printer, living in Ibiza, Spain. As he was returning there soon, they decided to follow him. They left their flourishing careers in the theater in New York City, and embarked on the adventure into the Unknown.

In Ibiza, they opened an art gallery off the main plaza of the 2,000-year-old town. Prema continued to work on the drawings for the cartoon book and create silkscreen art with Hugh, while running the gallery.

The MicroCosmic Cartoon Show became the avenue of expression to portray, through art, the reflection of the Macrocosm on this plane of existence. As Source crystallizes into all its myriad forms, we, as artists, attempt to capture the infinite Truths in our creations.

Their journey took several turns as they found the spiritual school they had been searching for in England. After a year of intense training in the Fourth Way Work of George Gurdjieff, with John Bennett, they began a six month overland passage to Auroville, India. Prema knew she was to have a child there and, in fact, conceived Suryananda on the way, in Greece.

While traveling to India, their briefcase, with everything they had written and all the drawings, was stolen on a train through Pakistan and they had to start again. The original concept became fuller, as did the treatment, the story, and the images. Thus evolved the first draft of the screenplay for The MicroCosmic Cartoon Show.

The MicroCosmic Cartoon Show Production and Prema Rose Productions intend to create expressions of Hope, Faith, Courage, Inspiration, and Love as told through the stories of our lives.

The years went by and with them a lot of living and learning. Hugh and Prema divorced but continued to work together on the screenplay. Prema settled in Boulder, Colorado with her daughter, Suryananda, and her son, Michael. She had been inspired to become a midwife ever since Surya was born in Auroville, India. Prema practiced midwifery for twenty-five years while raising the children and added two more, Mira and Noah. She, also, continued her passion for the theater and performed within the Boulder community.

Hugh worked as an actor out of New York and eventually moved to California and is pursuing his creative and business interests.

In 2002, Prema and Surya started rewriting the screenplay to ready it for submission to film festivals and won three out of four entries. Prema began the work of producing an animatic synopsis teaser. Finally, after five years, it was completed. Surya, who had grown up to become an animator, designed the website. Prema, also, created a DemoCD of several of the songs from the movie. They shot a live action scene to qualify the movie for inclusion in Section 181 of the US Tax Code. This is an exceptional tax incentive for investors.

From 2012 – 2015, We launched an unsuccessful Kickstarter campaign. Surya and I rewrote the script many times and, with the guidance of Bonnie Solomon (DreamWorks, Walden Media) and Voyage Media, we wove the live action narrative through the animation narrative. All the while, Prema was busy working on ways to financially support the ongoing production. It was tough going. I was in “Film Production School”. The MicroCosmic Cartoon Show became Fiscally Sponsored by From The Heart Productions, and I launched The Friends of  The MicroCosmic Cartoon Show 501 (c)(3) as the educational arm of the production to enable investors and donors to
make tax deductible donations to……

In 2015, I moved from Boulder to Paonia, CO, we won four more awards for the screenplay at Film Festivals and Competitions. These kept me going on. In 2017 and 2018 I went to the American Film Market, after a several year hiatus. (We were recovering from a large forest fire in our canyon outside of Boulder, the next year’s mudslides, and then the 1,000 year flood)!

Jack Binder has come on board as the Executive Producer.

We have created what promises to be an astounding movie. We hope you will be interested in supporting this endeavor. Go to the donation button and pass along the website to others who would be inspired to participate in promoting conscious media. If you are an accredited investor or a producer, please contact us for a copy of the screenplay and the business plans.

I have had some medical issues in the last couple of years. That slowed my work down to a slow crawl. I am currently recovering from COVID but I am recovering!

There are some interesting developments to the production that are in the works. I will update the timeline as we go.

Two business plans, one mid-budget and one higher budget, are available upon request. Progressing forward, we will be attaching talent, recording a working soundtrack of dialogue and music, in order to begin the blocking of the entire script. We will storyboard the shots, as well as focus on character and set design.

Section 181 of the US tax code is an exceptional incentive for investors in The MicroCosmic Cartoon Show production.
Please contact us for more information and details.

The mission of the Friends of the MicroCosmic Cartoon Show, 501c3 is to engage thousands of individuals in a common vision of establishing a more harmonious and balanced world though the art form of Transformational Media.

A boy’s burning questions, “Who am I?”, “Why am I here?”, and “Where is here, anyway?” propel him through The Circus of Life on a journey of Self-realization, in this award winning musical adventure.

We are seeking to enroll investors and donors in order to generate funding for the advancement of The MicroCosmic Cartoon Show production. We will provide in depth educational opportunities to examine The Hero’s Journey, within the metaphor of the movie, and how that applies to each of us. As the inspirational journey of our lives is unique to everyone, we hope to inspire the youth of the world to find their own path of transformation, consciously.
Thank you for your participation.

Donation subscriptions and single donations are the Life Blood of the production, as they enable us to move forward with the long list of expenses that make up the creation of a film. Without you this vision would not be possible. YOU are the foundation for The MicroCosmic Cartoon Show.

We are forever grateful for your financial support. Thank you for your participation.

If you are a potential producing partner or an investor/donor, you may request the screenplay for The MicroCosmic Cartoon Show by emailing me at prema@themicrocosmiccartoonshow.com.

It is best to listen to the music demo that is on the website so that, when you are reading the script, you have an audio sense of how these songs fit into the narrative.

What People are Saying